It’s common to many Asian countries. You see it on TV. You read about it on other people’s blogs. But when you witness it with your own eyes, only then you realize how ridiculously funny and dangerous it is. Of course, I’m talking about people transporting all kinds of crazy, odd and huge stuff on their motorbikes. They zoom by before I ever manage to say cheese and snap a photo of this exhibitionism. But believe me when I tell you – sometimes I spend days pondering how they get it on the bike and how, in the world, they manage to drive.

Most of these stunts include two guys: one driving and one sitting in the back struggling with the whatever odd object it is they are transporting. The front guy pretends as if absolutely nothing strange is going on behind his back and drives as usual. The guy in the back, however, tries very hard to display the same indifference, acting all cool, but in reality, he is scared, concerned and embarrassed at the same time. You can tell from panic glances he gives to passing vehicles.

So what have I seen so far, you wonder!? Let me list it out for you in less-to-more-crazy order:

12. A suitcase – now this is not your small take-on-the-plane suitcase. No sir, this is the real deal; at least 30kg monster which usually sits on the lap of the girl on the back of the bike. She struggles to hold the suitcase and herself, and I always imagine her legs going numb, and eventually blue from the lack of circulation.

11. Crutches – OK, so if the person is injured he carries his crutches. It’s not like he really needs his legs to function when he’s on a bike, right?

10. chicken – most of the bikes in Kathmandu have metal rods in the front that protect driver’s legs from being hit or squished by something (at least that’s what I think). I have seen those metal rods sporting several dead chicken hung by their legs, just dangling casually as the wind ruffles their feathers (tmi?). Interesting sight. (edit 20 Oct, 2013: I have come to find out that the chicken in question are not actually dead. They are hung from the motorbike upside down upon which they faint. Oh boy.)

9. Mirror – it might not seem odd at first, but when you realize the guy in the back holding the mirror spends the whole ride looking at himself, it becomes darn hilarious.

8. Dog (or a goat) – or any live animal for that matter – it’s just plain odd and dangerous. Trust me, it’s nothing like the sight of ladies in Amsterdam who carry their small puppies in the baskets on the front of their bicycles, together with a bunch of freshly cut flowers. This is more like a semi-wild animal ready to jump off the moving bike at any given moment, and person struggling to keep the bike straight and hugging the animal real tight at the same time. Nothing cute or romantic there.

I have no good photos to illustrate this post. This one will have to do. Sorry.

7. Blueprints and a variety of building material (insert whatever you fancy here – I’m sure anything and everything applies) – I have absolutely no comment here. Imagine the sight of someone transporting a bunch of bricks on a bike. ‘Nugh said.

6. Ladder – big, metal, real deal ladder. Front guy driving, back guy holding the ladder on his shoulder. No red flags or orange triangles in the front or in the back of the ladder that is twice the length of the motorbike. Those have been used earlier to decorate the trucks.

5. Satellite dish – it’s like carrying a plate, just bigger. Not. Definitely not. Hell no.

4. 20L jugs of water – one tied up in the back of the bike, the other one sitting freely in drivers lap. I have no idea how that guy maneuvers. It must be hell for him. Poor guy.

2. Gas cylinder – this one is self-explanatory – not only it’s heavy, dangerous and difficult to handle, imagine what would happen if it rolled off!

You see what I did there? It’s not ghost town, it’s goat town. Witty, huh? I know, I know, pretty lame, but in all honesty Kathmandu has turned into a goat town for the past couple of days. And it is not surprising given that on coming Saturday Hindu people celebrate the 8th day of Dasain called Maha Asthami. This is the day when the most demonic of Goddess Durga’s manifestations, the blood-thirsty Kali, is appeased through the sacrifice of hundreds of thousands of buffaloes, goats, pigeons and ducks in temples throughout the nation. Blood, symbolic for its fertility, is offered to the Goddesses. Really, people don’t only do the sacrifice in temples but also in their yards.

I have been seeing goats all over the place these days. They are bleating everywhere I turn. This morning while driving to work, I realized a huge part of the road has been made into a goat market. It’s kind of cute and really morbid at the same time. People can be seen everywhere picking goats up to test the weight, inspecting them for fat and meat quality, and walking them around on a leash. Also driving them around on motorbikes and in taxis. It kind of looks hilarious, but when I remember the poor destiny of these animals, it’s not funny anymore. 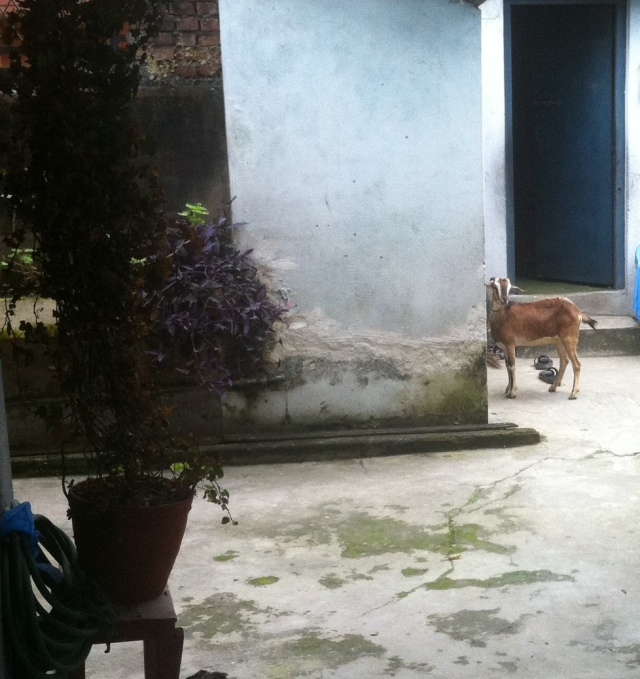 What to say? Outlook is not positive. Sorry goat.

I do like goat meat, or popularly known as mutton around here, but I’m not sure how I feel about meeting the origin of it in person. I’m a city child – I never had to kill an animal myself to eat it. But I do remember times when I would be dragged to chicken and pig slaughters (for a lack of better word) in the countryside when I was a kid. I suppose it’s not much different than goat sacrifice that will happen on Saturday. Yes, it’s cruel and probably unnecessary, but on the other hand it’s tradition and eventually a circle of life. Argh, it’s a tough one – it’s hard to pick a side.

What’s your take on the whole thing? Do share.

Goat or not, happy Bijaya Dashami everyone!

* Please be advised that these are just my thoughts and are not meant to offend anyone, make accusations, or entice revolt of some kind. I am pro-law and strongly urge everyone to follow the laws and rules of the country and respect leadership and authority. There you have it.

After this short intermission, we now go back to our tales of Kathmandu. I’m not going to lie to you – many a time I get frustrated. I get frustrated because I do not understand (famous line of the Husband but that’s a story in an of itself for another post). I don’t understand how Nepali people can be so indifferent to everything. Don’t they understand that driving in the preexisting lanes and following road rules will only lessen the traffic jam, not increase it? Why does everyone always need to be first on the traffic light when time is not much of a concern here anyways? Don’t they realize that letting someone go in front of you might actually help you move faster? I just don’t get it, and it gets me so frustrated. Sometime in the evenings as I sit in the back of the car being driven home, I just want to jump out of the car, slap other drivers, one by one, across their faces, and tell them they are idiots. OK, that might be a bit harsh. But I do want to roll down my window and explain basics of normal traffic to them. But then I look around and realize it would probably take me months and months to explain it to everyone, so I just give up and try to tone down my frustration.

Why aren’t the police officers exercising their authority in a harsher manner? They just stand there, waving their arms up and down without much effort in enforcing the rules. If they would be stricter, people would obey the rules more. Are they lazy, or simply indifferent?

Fighting traffic in Nepal is a life-risking challenge

One other thing I don’t understand is why Nepali people are not out in the streets. I mean, they are out in the streets; they’re everywhere, all the time. But, I am referring to protesting. This is a country that barely has any electricity, almost no water (despite the fact that it’s one of the water-richest countries in the world), no welfare or any kind of social security or services for its citizens. And this is all due to lack of good political leadership. Why aren’t people protesting? Why are they taking it so calmly? They are paying taxes, so why aren’t they out there demanding their rights? I don’t understand it and it is getting me very frustrated. I sometimes want to yell: “What is wrong with you people!? Get out there! Protest, demand, ask for what you deserve!” And, no, bandhas (strikes) are not the way to do it. They serve no purpose.

Speaking of bandhas, I don’t understand why no one is doing anything about it. They cripple the country. Because of them, businesses lose money, people lose their jobs, sometimes even their property and lives. Why is no one standing up and saying: “This is enough! This needs to stop!”? Everyone is complaining quietly, in the privacy of their own homes, mumbling something about how they hate walking to work. So, why aren’t people attacking bandha enforcers, instead of letting being bullied all the time? I don’t understand. I simply don’t understand. And it frustrates me.

Nepal is an absolutely beautiful country, sadly without any rules at all. What a shame!

This post is not going to be about Nepal. I am re blogging this from Christian Mihai and it describes so well all the struggles I went through in my head before moving to Nepal.